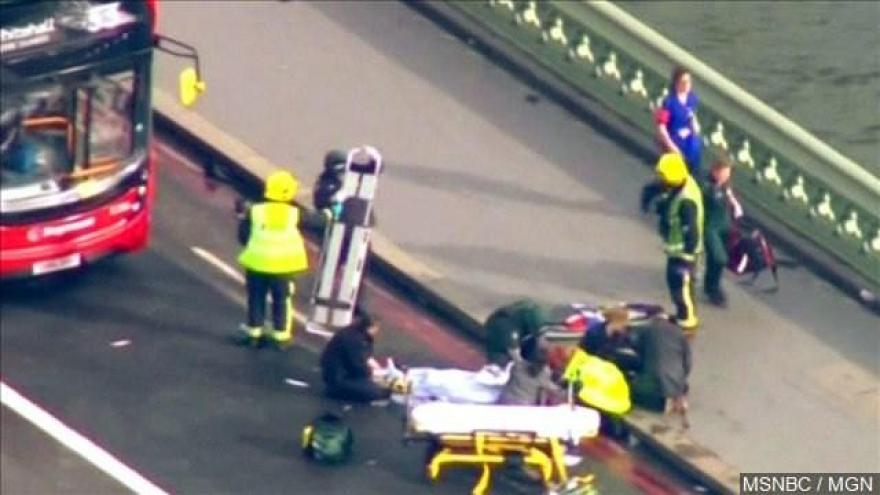 The two are 58 and 27 years old, police said. Both were arrested Thursday in Birmingham, according to police.

Eleven arrests have been made over the course of the fast-moving investigation since Wednesday's attack that left four dead, including a police officer. Seven of those arrested were released with no further action overnight. Two are out on bail pending further enquiries.

All but one of those were detained on suspicion of preparation of terrorist acts.

On Friday, Britain's most senior counterterror police officer, Mark Rowley, said authorities are working to establish if the attacker, Briton Khalid Masood, 52, "acted totally alone inspired by terrorist propaganda or, if others have encouraged, supported or directed him."

Rowley said 16 searches at various locations have concluded but that five others were ongoing. Officers have seized 2,700 items, including "massive amounts" of computer data, and have had contact with 3,500 witnesses to the attack, many of them of different nationalities, he added.

Police are also investigating the killer's possible contacts. Local media outlets reported that Masood might have been in contact with unknown individuals just minutes before driving his rented car at pedestrians on Westminster Bridge shortly after appearing on WhatsApp, the popular encrypted messaging platform.

Rowley said: "Clearly that's the main line of our investigation -- is what led him to be radicalized. Was it through influences in a community, influences from overseas or through online propaganda?"

He appealed for anyone who knew Masood well or was aware of his recent movements to get in touch with authorities.

Born in Kent, Masood had previous convictions, including some for violent offenses but none for terrorism, police said. His most recent conviction was in 2003 for possession of a knife.

Masood visited Saudi Arabia several times and was an English teacher there periodically between 2005 and 2009, according to a statement from the Saudi Embassy in London published on the state-run Saudi Press Agency. He wasn't on the radar of security services, it said.

Masood didn't teach in any English-language school in the UK, Britain's Department for Education previously said, citing its records. His criminal record would have prevented him for passing the necessary checks to become a qualified teacher.

Meanwhile, Queen Elizabeth II honored two members of the UK Parliament for their heroics in the aftermath of the attack, Downing Street announced Friday.

Foreign Office minister Tobias Ellwood tried to save the life of Keith Palmer, the police officer fatally stabbed by the assailant. Ellwood along with Security Minister Ben Wallace, who helped coordinate the government's response, have been approved as members of the Queen's Privy Council.

The pair will now be entitled to be referred to as "right honorable" as members of the group of advisers to the monarchy that includes present or former members of the House of Commons or House of Lords.

In addition to four deaths, this week's attack injured at least 50 more, 31 of whom needed hospital treatment, Rowley said. Two people are in critical condition, and another has life-threatening injuries.

American tourist Kurt Cochran and college administrator Aysha Frade, a British citizen with Spanish roots, as well as Palmer died Wednesday. A fourth victim, Leslie Rhodes, 75, from Streatham in south London, died Thursday night after his life support was withdrawn, according to the Metropolitan Police.