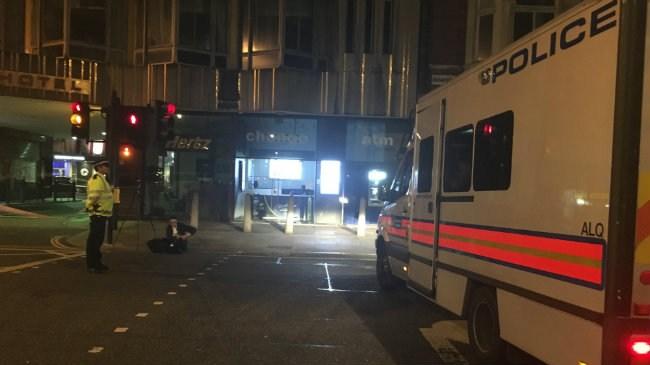 By Joshua Berlinger and Radina Gigova

(CNN) -- One woman was killed and five other people were injured in a knife attack in central London's Russell Square, London Metropolitan Police said.

Authorities said a suspect, a 19-year-old man, is in police custody at a hospital.

The woman killed is in her 60s, authorities said.

Mental health is a "major factor" in the investigation but terrorism remains a line of inquiry.

"As a precautionary measure tomorrow, Londoners will wake up and in the morning they will notice increased police presence on the streets, including armed officers," Mark Rowley, the Scotland Yard assistant commissioner, told reporters. "This is there to provide reassurance and safety. We ask the public to remain calm, vigilant and alert."

Officials briefed on the investigation told CNN earlier that based on early evidence, investigators believe the incident was a terror attack.

"The fact that they're evening mentioning terrorism leads me to believe that some of the witnesses and some of the victims may have said that this guy may have made some statements while he was carrying out the attack," former FBI agent Bobby Chacon said.

"The normal posture is to calm the public and say we don't have any information that it's terrorism yet."

Counterterrorism police are supporting the investigation, but not leading it, authorities said later.

Police were called in at 10:33 p.m. Wednesday local time after reports of a man "seen in possession of a knife injuring people," authorities said in a news release.

A stun gun was used on the suspect, and he was arrested less than 10 minutes later, authorities said.

The officials also said one injured victim appears to be American.

The incident comes just hours after authorities announced London would increase its presence of armed police after recent terror attacks in Europe.

Located in the Bloomsbury district of west central London, Russell Square is close to the main buildings of the University of London and the British Museum.

The area is popular with tourists because of its proximity to museums and central London. It also boasts many upscale hotels and homes.

Though it's located in central London -- which is usually busy on summer nights -- Russell Square isn't particularly bustling when compared to other nearby neighborhoods, which are home to more restaurants and bars.

In the terror attacks of July 7, 2005, the underground subway line running close to Russell Square was hit by the most devastating of the four bombs.