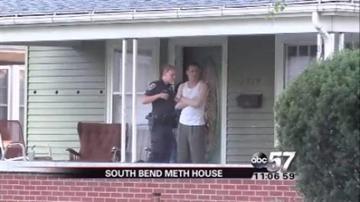 SOUTH BEND, Ind.-- ABC 57 learned Thursday that the drug house on Longfellow Avenue we told you about earlier this week has been deemed a meth house by South Bend Police. It's leaving neighbors on that street with many questions tonight. It got us at ABC 57 wondering, what do you do if you notice drug activity in your own neighborhood?

For the past two years, one house on Longfellow Avenue has been not only an eyesore for residents but now is deemed a death trap. ABC 57 wanted to help residents and those in other neighborhoods find out what to do if you suspect a meth house in your own back yard.

Number one. Police say to use your senses. Especially your sense of smell.

“You’re going to pay attention to those really foul odors like rotten eggs or maybe cat urine, a strong smell of ammonia coming out from the house next door,” Mishawaka Police Department Lt. Tim Williams said.

It's also important to track suspicious activity. Including how often it happens and what time of day it occurs.

Also, get to know your local law enforcement.

That way when trouble does happen in your neighborhood, you are familiar with who to call.

Hess also said the neighborhood of Sunnymede is already on the right track by communicating and watching out for each other. One of the best ways residents in Sunnymede do that is through their Facebook page.

Hess said communication is often the first line of defense.