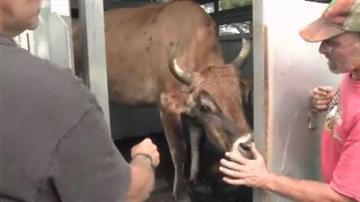 NEW CARLISLE, Ind. -- A bull and a cow got loose around 6:30 a.m. from their yard on Snowberry Road. It took Two St. Joseph County Humane Society officers several hours to finally round up the livestock with the help from mounted police units.

"It was about 6:30, 6:50ish my partner got a call saying there were two loose cows in someone's driveway in a little residential neighborhood over here,” said Zach Collins, officer with the St. Joseph County Humane Society.

Catching them was no easy task.

"We proceeded to chase them around, through fields and through woods and through the warehouse for about three and a half, four hours,” said Collins.

"The guys came with the horses and they lassoed them and wrapped them around a pole I have out back and kind of calmed them down. And then we kind of just worked him up to the trailer,” said resident Dick Bradshaw.

It's a situation that's not out of the ordinary for the Humane Society.

"It happens quite often, but usually we catch them pretty easy. This was a pretty intense event because the bull was pretty aggressive,” said Collins.

Maybe even aggressive enough to knock down a fence more than six feet high.

"Probably the storm. Probably spooked him or something. He's a pretty big boy in there so if he wants to go, he's going to,” said Collins.

The owner of the cows plans to repair the fence and make it a little stronger.