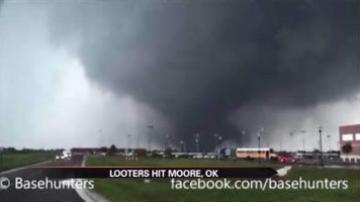 MOORE, Okla. — Police in Oklahoma say that looters are preying on tornado victims in the city of Moore.

Officers say thieves are coming from as far away as Virginia, New York and California to pick through the debris.

They're stealing everything from copper wires to refrigerators left behind from the May 20 EF-5 tornado.

There's even an instance of some looters wearing reflective vests trying to blend in with work crews.

Police say they are stepping up patrols.

"We have officers on each side of the city that are just assigned to the disaster areas, responding to the calls," said Sergeant Jeremy Lewis. "If it's obvious they don't belong, officers are contacting them, asking for I.D. and seeing why they're in the area."

Several suspected looters have already been arrested and charged.

The tornado injured hundreds and killed 24 people. It caused an estimated $2 billion in damage.