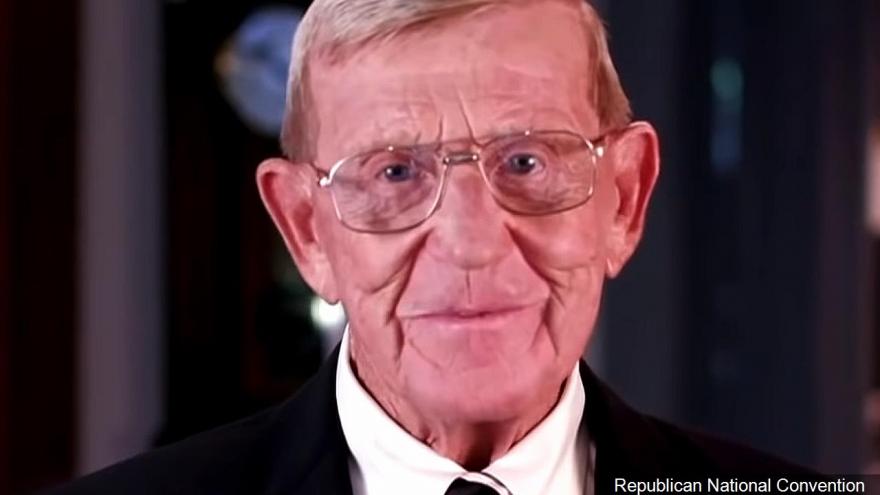 President Trump will award Lou Holtz the Presidential Medal of Freedom in a ceremony on Thursday.

The award is the nation’s highest civilian honor.

President Trump announced in a press conference attended by Holtz in September that he planned to give Holtz the honor, but the date for the ceremony had not been set.

More information from The White House:

America recognizes Lou Holtz as one of the greatest football coaches of all time for his unmatched accomplishments on the gridiron, but he is also a philanthropist, author, and true American patriot. After growing up in a small town in West Virginia, Holtz attended Kent State University, becoming the first member of his family to enroll in college. At Kent State, Holtz played football, studied history, and joined the Army Reserve Officers’ Training Corps. For the next 7 years, he honorably served as an Officer in the United States Army Reserves. When asked about his service during an interview with the American Legion, Holtz said, “I was taught at an early age that I had an obligation to serve my country.”

Upon graduating from Kent State, Holtz began his historic coaching career as a graduate assistant at the University of Iowa before landing his first head-coaching job at the College of William and Mary, leading the team to the Southern Conference Title and an appearance in the Tangerine Bowl. Over the next 35 years, Holtz led successful college and professional football teams, including North Carolina State, the University of Arkansas, the New York Jets, the University of Minnesota, and the University of South Carolina, compiling an impressive overall record of 249-132-7. Most notably, Holtz earned an outstanding 100-30-2 record in 11 seasons at the University of Notre Dame. His 1988 team earned a perfect 12-0 record and were crowned national champions. Most importantly, he inspired generations of young athletes along the way.

Since his retirement from coaching, Holtz has authored several books, contributed to ESPN and CBS as a sports analyst, and continues to give back to his community through two of his own charities, the Holtz Charitable Foundation and the Holtz’s Heroes Foundation. In commemoration of his outstanding accomplishments both on and off the football field, Holtz was awarded honorary doctorates from the University of Notre Dame, the University of South Carolina, Trine University, and the Franciscan University of Steubenville. He was also elected to the College Football Hall of Fame, the Arkansas Sports Hall of Fame, and the Upper Ohio Valley Hall of Fame, among many other well-deserved accolades.