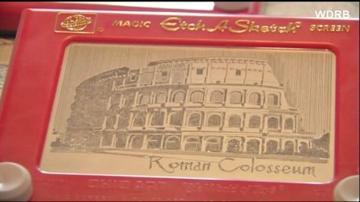 LOUISVILLE, Ky. -- When you were a kid, maybe you were pretty handy with an Etch-A-Sketch, but probably not as good as an artist in Louisville.

The woman's work with a children's toy is drawing even more attention than her oil paintings.

"I would say that doing Etch-A-Sketch stuff is almost kind of like doing tattoo, like doing tattoo art, because you draw on something and you can't take it back. It's there," said Carrie Johns. "Somebody asked me once if I could do a picture for them and I did - it just has been something I was able to do."

From the Roman coliseum to Rick Pitino, Peyton Siva and the National Champion Louisville Cardinals, Carrie brings them to life with a toy she used to play with as a kid during long car rides.

"I needed something to keep me busy, so I just started drawing on it, and everybody was impressed," said Carrie.

Her companion became a passion, a canvas of glass, aluminum dust, and a needle -- art pre-framed by red plastic.

"I think it's a really neat feeling to see people react to someone who can draw on an Etch-A-Sketch," said Carrie.

She likes to start with the needle in the middle, working her way out-- always signing in the lower corner.

The process can be painstaking, time consuming.

"I've done two or three a year at the most, but I'd love to do more," said Carrie.

She even sold a few for more than $100. She's hoping to make it a supplemental income.

But how does one treat a piece of art that was created on the same medium, the same toy her son plays with?

"You have to treat it as a piece of art. You have to leave it straight up. You can't drop it. You have to be really careful with it, because if you break it, it's done," said Carrie.

Be careful, unless you're okay with buying the same art twice.

"Maybe you shouldn't be so careful with it, because if you drop it, maybe I can do another one for you."