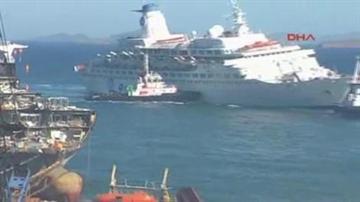 IZMIR, Turkey -- The cruise ship made famous by the TV show The Love Boat has made its final voyage - but it didn't go as expected.

The ship, used on the ABC television series in the 1970s and 80s, sailed from Italy to Turkey.

While entering port, the ship was damaged and took on water.

An operation to dump the water caused an explosion that killed two people and injured six others.

After retiring from the TV series, the boat was used for Mediterranean tours.

It will now be dismantled by a recycling firm.