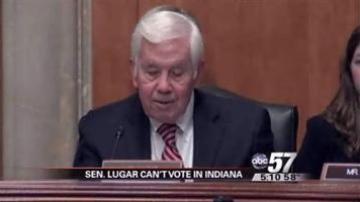 An Indiana election board decided that he is no longer eligible to vote in his home precinct in Indiana.

Questions about Lugar's residency were first raised by his GOP challenger, State Treasurer Richard Mourdock. Mourdock says Lugar was barely ever in town.

The Senator sold his Indianapolis home and has lived in Virginia since he was first elected 35 years ago.