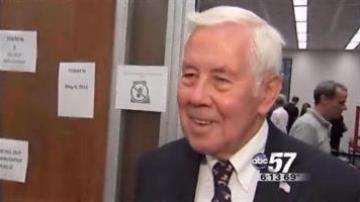 Lugar is seeking his seventh term.

Here's what he said when asked about the numbers.

"My reaction is a rigorous 'Get out to vote! We believe that we have the majority support in this state and that we are going to win," said Sen. Richard Lugar.

A survey done in March showed Lugar with a seven point lead.

Mourdock claims Lugar is out of touch with voters and needs to make way for a true conservative.