Made in Michiana: Daman Products 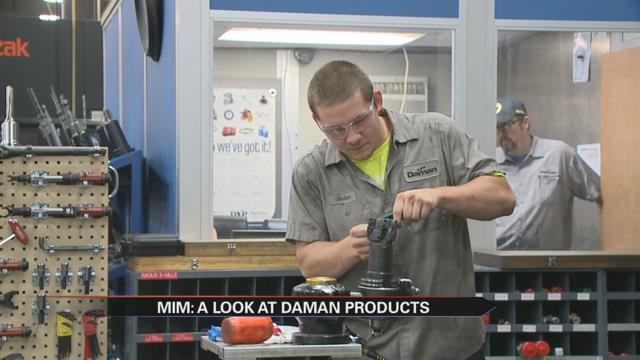 It's a classic American success story.

“He sold his home, invested what little money he had, the banks wouldn’t loan him any money, so it was a pretty significant struggle in the beginning,” Daman Products President Larry Davis said.

Larry Davis and his dad launched Daman Products out of their garage almost 40 years ago.

“The building was a small building in Mishawaka. 60 x 60 building,” Davis said.

He says it was ten years before they finally felt like they could make it.

“If we had known how hard it was going to be, we wouldn’t have done it. I’m positive,” Davis said.

But they did do it. And good thing they did. Davis's dad saw a need in the hydraulics industry nationwide, so he filled it.

“They were more of an afterthought in the market at that time,” Davis said.

Today, Daman provides hydraulic valve manifolds to clients in all different industries across the nation.

“You think about hydraulics it’s all around us. Anything that moves up and down, sideways is probably powered by hydraulics we just don’t see it,” Daman Products Vice President of Sales Gordon Weiler said.

So what is a hydraulic valve manifold?

Weiler explained that to us.

Or in simpler terms, Weiler calls it a square block with holes in it. You can find these blocks almost anywhere. From the food industry, to a construction site, to an amusement park, even helicopters.

“Hydraulics are used in virtually every industry,” Davis said.

To build these manifolds, Daman employs more than 100 skilled workers.

“We always want to promote from within to provide opportunities to those people. To do that, we have to grow. So we have a strategy towards ten to 15 percent growth every year,” Daman Products Executive Vice President David Mischler said.

They credit their growth, to the culture at Daman.

Shoulders says they stay because employees are part of the daily decision making process, they have what they need to do their job, and there's an opportunity for upward mobility.

“Our desire is that this will be their last job,” Shoulders said.

And it's this culture that helps Daman ship its product all over the nation.

“When we have customers here or our sales force goes outside to customers, how we operate is a big selling point,” Mishchler said.

So the next time you enjoy a Coke, or hop on a roller coaster at Universal Studios, remember to thank manufacturers like Daman who make the comforts of life possible.

If you have an idea for our Made in Michiana series, email us at News57@abc57.com