Made in Michiana: Hoosier Bat Company 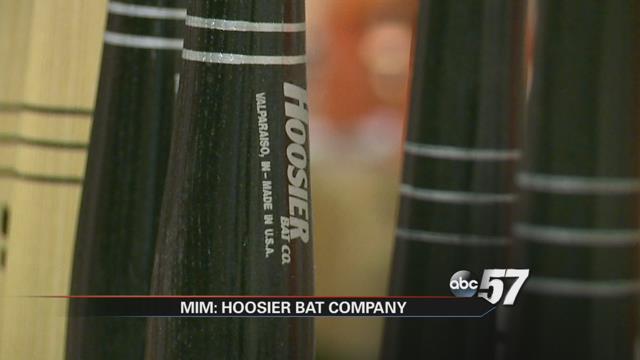 For 26 years, Hoosier Bat Company in Valparaiso has cranked out custom-made wooden bats for all kinds of players. Many have tried, but no one has been able to replicate this one-of-a-kind bat.

Hoosier Bat co-owner Dave Cook is no stranger to some of baseball's greats.

“David was a scout for the Yankees and he would sign these players and he would be calling them after they made it to the team, just explaining to them that they were having a hard time making the change from aluminum bats to wood bats,” Dave's wife and Hoosier Bat Co. co-owner Debbie Cook said.

In fact, it's that scouting gig that would eventually lead him to his own "field of dreams" of sorts.

“I said I’ve got to think of some type of an idea that would counteract aluminum bats, which I call recycled pop cans because and that’s all they are, they’re junk. And that’s how the three piece came about. I’m the only company that can make them. Everybody else has tried but they can’t,” Dave said.

Dave says he knew right away he was onto something big.

He and his wife, Debbie, are part of a four-person operation. They say they can ship up to 30,000 bats a year.

“It has an ash handle, a six inch hickory hitting area, and soft maple on the barrel end. The wood is put together with what’s called a finger joint cut,” Debbie said.

“The sweet spot is the area where when the ball hits that area, the ball is going to go the furthest. With this bat, instead of that two-inch sweet spot, you’ve got a six inch sweet spot,” Debbie said.

In their 26 years of business, they say less than a handful of their bats have broken or split from a hard hit.

“That’s what customers have come to expect from us is our quality and our service,” Debbie said.

The Cooks take the time to get to know each and every customer. They've put their bats in the hands of pro sluggers like Frank Thomas, Lance Johnson and Sammy Sosa.

But you won't only find them here in the States.

“Before Cuba was open we even shipped bats to Mexico, who shipped them onto Cuba so the Cuban National team used our bats about 15 years ago,” Debbie said.

And those signature "three stripes" are in even more countries all over the world.

“There’s a lot of rewards. But even today, after 26 years there’s still a lot of scary days where you just don’t know is that phone going to ring are we going to get those orders?” Debbie said.

After nearly three decades in a competitive and cut-throat business, this Michiana couple still appreciate a passion for the game.

“The customers that I really love are our minor league players because they really have the heart and the soul and they’re struggling. I love to work with them and hear their stories about where they think they’re going to be and how they got to where they are,” Debbie said.

Pro or Pony League, this bat seems to be a hit that's likely to stay in the game, and here in Michiana, for awhile.

If you have any ideas for our Made in Michiana series, shoot us an email at [email protected]