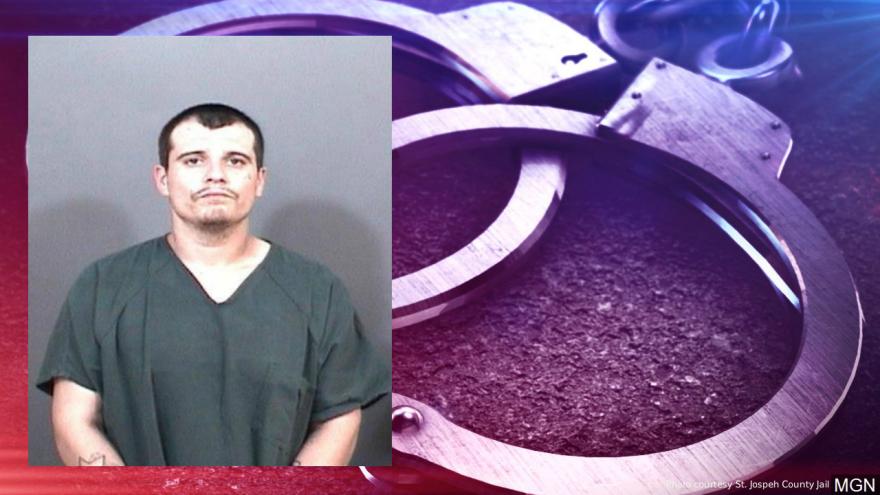 SOUTH BEND, Ind. – A man who police say robbed a Dollar General Store and threatened to kill the store’s clerk was arrested and booked in jail Friday.

According to a probable cause affidavit, 35-year-old Nicholas Jimenez allegedly robbed the store on Ironwood Drive near Mishawaka Avenue of t-shirts and a can of spray paint.

The store’s clerk told police Jimenez walked out the door and got into a Hyundai Sonata.

She was yelling at him to pay for the items when he drove near her with the driver’s door open and pointed a handgun at her. He threatened to kill her, according to court records.

The clerk provided police with a description of Jimenez and surveillance footage, as well as a photo she took of his license plate.

Court documents say when Jimenez was questioned by police about the robbery, he admitted to stealing the items and threatening the clerk but denied having a gun. He agreed to meet officers at his house to turn himself in.

Police note Jimenez did not show up for that meeting.

Other law enforcement around the area was made aware of his description and was eventually spotted at Four Winds Casino South Bend by Pokagon Tribal Police later that afternoon.

Officers talked with Jimenez at the casino and searched the Sonata. Court paperwork says police found needles consistent with recent use of heroin. Three other hypodermic needles, a burnt spoon, and other paraphernalia was found.

Jimenez was detained and taken to the South Bend Police Department where he admitted to the robbery and threats again. He also admitted to having just sold a BB gun but denied using it in this incident.

He was booked in the St. Joseph County Jail on charges of theft, intimidation, robbery, and possession of a hypodermic needle.