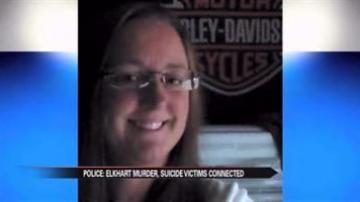 ELKHART COUNTY, Ind. -- The Elkhart Sheriff’s Department has confirmed the investigations into the deaths of Debbie McDowell and Ervin K. Howard are linked. The undersheriff confirmed Howard called the 911 dispatch center and said he shot McDowell on Saturday.

Just two days ago police and deputies fanned out across Elkhart County investigating two deaths, the bodies found within an hour’s time.

Debbie McDowell’s body was found in the parking lot of the former farmer’s market just before 11 a.m. Saturday.

About an hour later Elkhart Police responded to the former Poor Tony's restaurant and found 63 year old Ervin K Howard dead in that parking lot with a self inflicted gunshot wound to the head.

We now know from 911 recordings that Howard said he shot McDowell and gave officers the exact location.

In McDowell’s neighborhood, a neighbor said she was a loving wife and mother of two.

The neighbor said it has been a difficult couple of days.

Deputies are still conducting interviews to find out the exact relationship between McDowell and Howard.

While the two bodies were found nearly 4 miles apart, the two lived within a mile of each other.

Funeral arrangements for McDowell are still pending at Stemm-Lawson-Peterson Funeral Home in Elkhart.