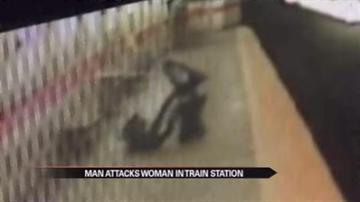 PHILADELPHIA -- The surveillance video from Philadelphia's subway system is graphic and disturbing.

A random and violent attack that leaves one woman beaten and bruised on the subway tracks.

The woman survived the assault and Philadelphia police have arrested 36-year-old William Clark after a city-wide manhunt overnight.

The attacker was still in possession of her cell phone.

"Picked up her cell phone and strolled out of the station. He didn't even run," said Thomas Nestel, Philadelphia Police Chief.

Police plan to charge him with aggravated assault and robbery.