Man charged with voyeurism for videotaping next door neighbor 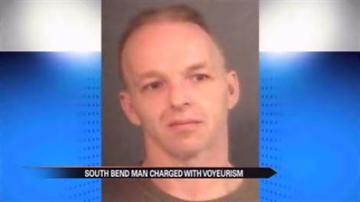 SOUTH BEND, Ind. -- Indiana State Troopers were expecting to find marijuana plants at Delmar Talley's home, but they also found a camera he was using to spy on the woman next door, according to troopers.

Neighbors lviing along Beverly Place say they can't believe something so disturbing happened so close to home, but what bothers neighbors the most is that Talley is out of jail and is back home again.

"First scary, then sickened and now I am angry," says LaRena Stuckwisch. "How could this happen in my neighborhood?"

"I never in a million years thought some like that could have happened," says Katie Wesolowski.

On top of the 169 marijuana plants in Talley's home, officers found a secret camera. It was set up in his attic and pointed directly at his neighbor's bedroom window.

"Very disturbing and it's scary to know that something like that took place on our street," says Wesolowski.

"I feel violated, I feel like our neighborhood has been violated," says Stuckwisch. "Who is he, where did he come from?"

Troopers say Talley admitted to videotaping the woman for the last six months, watching her undress and then watching the recordings afterwards.

Investigators say the camera was connected to a computer, which had several pictures and at least 20 videos of the woman saved on it.

The woman told police she hardly knew him and had no idea she was being ideotaped. Now, It is serving as a wake up call to the other residents to protect their privacy and each other.

"You need to know your neighbor a little bit so we can feel safe with each other and maybe know who we're not safe with," says Stuckwisch.

Investigators says charges are pending for the marijuana plants found in Talley's home, but troopers say their investigation isn't over.