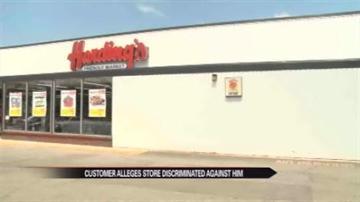 NILES, Mich.--Paris Jackson claims to be a victim of discrimination over the smell of his breath.

"It is not a friendly market."

That's what he has to say about Hardings Friendly Market, the grocery store that he's shopped at for more than twenty years.

Jackson says the last time he walked up to the register, a cashier refused to wait on him.

"She said no, so I stood there," said Jackson. "I paused for a minute. I asked 'ma'am are you going to help me' again and she said 'no I'm not going to help you because you stink. Your breath stinks.'"

Now Jackson's angry and says no customer should face public embarassment like he did.

"There were other people around me that heard what she said and walked away, left the groceries at the cart and walked out the door because of what she said," said Jackson.

Another employee eventually stepped up to the check-out and Jackson paid for his groceries, but he says he'll never pay that place another visit.

"I will never step foot in that store again," said Jackson. "I called Mr. Bill today and asked him why wasn't she disciplined and he told me he was not going to fire her and I said she deserves to be fired. You don't treat customers like that."

Jackson says if the store won't take action--he will. He's speaking with a lawyer who specializes in cases like these.

"That's called discrimination. It aint gotta be a black or white thing. You can discriminate by words that you use in your mouth," said Jackson.

The store's manager refused to comment when ABC57 news entered the store.