Man comes out of coma after being shot in the head 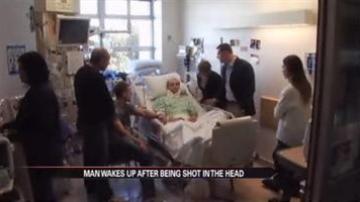 SAN FRANSISCO. -- A Christmas miracle has come early to one family. A California man who was shot in the head has come out of his coma.

21 year-old Benjamin Pessah opened his eyes, spoke his first words and even took his first step Friday after being in a coma for over almost a month.

Following a Halloween party, a stranger made inappropriate advances toward Benjamin's girlfriend. When Benjamin came to her defense the stranger shot him in the head.

His brain wound was so severe doctors only gave him a 25 percent chance of living.

Friday, that percent has significantly increased.

"I went in there and told him to say 'hi mom' and he said 'hi mom' and that brought me to tear," said Kim Pessah, Benjamin's mother.

Benjamin's close knit family is now enjoying these precious moments with him and are optimistic that he'll recover fully.