Man flashes teen, tells her to get in his car 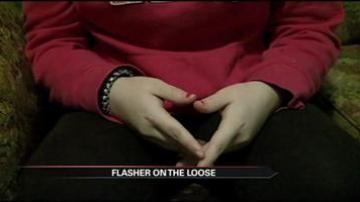 MISHAWAKA, Ind. -- The search continues for the man who exposed himself and attempted to abduct a Mishawaka teenager. The mother of that teen is asking for your help finding him.

A frightening experience for a Mishawaka teen unfolded right near the corner of Lincolnway and Smith on Monday afternoon.

The teen, who did not want to be identified said, “He was honking and I heard him because I pressed pause on my music and I turned around and his penis was sticking out of the window.”

“We definitely don’t want this person in our community because we want our children to feel safe,” said Lieutenant Tim Williams of the Mishawaka Police Department.

They are looking for the driver of a gold pickup truck—either a Ford or a Chevy with an extended cab.

Their major concern- that the flasher didn’t stop there.

The teen was waiting for the bus just across the street when the suspect approached her and told her to get inside his car.

Realizing he was trying to abduct her, the 15-year-old walked away quickly and called her mom.

“When I got the phone call and I heard her voice and she was so shaken up I couldn’t understand what she was saying, my nerves went through the roof,” said the victim’s mom.

She said they won’t feel at ease until he is found and taken into custody.

“Our officers are saturating that area looking for the vehicle. But we’re urging the public to get involved so we can actually solve this quicker,” said Lt. Williams.