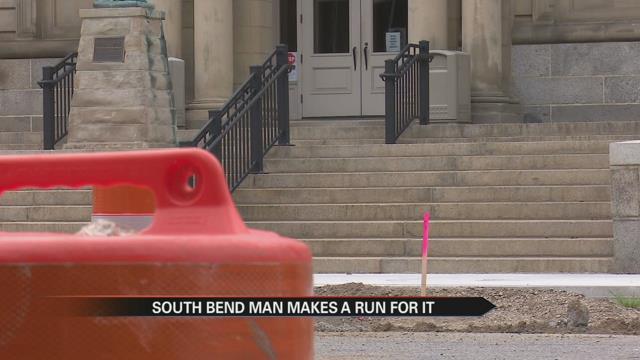 A man is back behind bars after fleeing the St. Joseph County Courthouse today in handcuffs. He made it pretty far before South Bend police caught up to him.

The man, Terry Dean—managed to run about 0.6 miles before police caught him on W Marion Street Friday morning.

Police were trying to take him into custody at the St. Joseph County Courthouse sometime between 10 and 11 o’clock in the morning when he took off sprinting down the street.

He ended up running all the way to an alley next to the house at 503 W Marion Street, where South Bend police finally arrested him.

One neighbor was working on his house upstairs when he said he looked through his window and saw Dean running down William Street and then up Madison Street followed by a few cops.

He said a few minutes later, police swarmed the neighborhood.

According to St. Joseph County police, Terry Dean was being taken into custody for a warrant for residential entry and battery.

Dean allegedly assaulted his girlfriend on August 6th and broke down the patio door after she had refused to let him into her apartment.

South Bend police arrested him and took him to the St. Joseph County jail later that night.

Terry Dean is also on parole right now for robbery out of Pennsylvania.

Most neighbors weren’t home to witness Friday’s chase, but those who were said they won’t soon forget it.