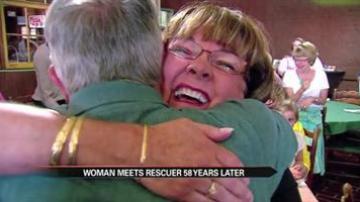 A Michiana man has been reunited with the baby he rescued as a teen.

Dave Hickman was just 14 when he found a baby girl wrapped in a towel left in the cold.

The baby, now Mary Ellen Suey, was taken to the hospital and was adopted a few months later but she always stayed curious about who rescued her.

Fifty-eight years later they found each other.

"And then I heard her voice and I said my name is Dave Hickman and then I lost it," said Hickman.

"I call him my hero here on earth because if it hadn't been for Dave I wouldn't be here," said Suey.

Monday, Hickman took Suey to the place where he rescued her 58 years ago.