Man rides on hood of car after argument 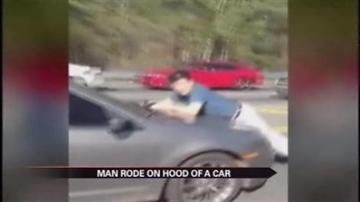 The man on the hood said a woman backed into his wife's SUV so he confronted her.

He tried to stop her from driving off, but the woman sped up instead. He landed on the hood as she drove for nearly two miles.

Police say they intend to charge the driver with felony aggravated assault, but that's only if and when they find her.