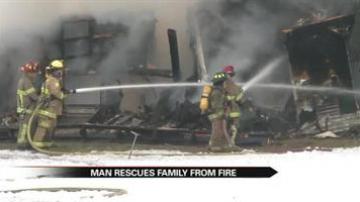 PLYMOUTH, Ind. -- A Plymouth woman's husband risked his own life to save his 90-year-old mother in law with dementia Tuesday afternoon. His wife says he is her hero.

"I pulled in and my house was fully in flames. My daughter is walking around with a smudged face. My 90-year-old mother is sitting in the middle of my yard. My husband is on the ground," said Mary Jo Kaser.

Mary-Jo Kaser was distraught when she returned home from work and saw her house in flames and members of her family injured.

The family's five cats and one dog were killed in the blaze.

Her 24-year-old daughter, Jennifer and her 90-year-old mother were taken to the hospital for smoke inhalation. They were treated and released.

Her husband is still in the hospital recovering from injuries to his lungs.

"He is stable. He was on four liters of oxygen last night when we came in. He sounds really junky," said Mary-Jo.

He sustained the injury when he went back into the burning home to save Mary-Jo's 90-year-old mother who has dementia.

"My husband went back in. My husband picked up my 90-year-old mother, carried her, he fell twice. He got her to the window. Between him my brother and daughter, he got her out and then he collapsed," said Mary Jo.

Mary Jo said she was grateful to all the firefighters who did everything they could to try to save her home.

"I just want to say thank you from the bottom of my heart," said Mary Jo.

Mostly she is thankful to her husband who risked his life to save her mother's.

The Kaser family does have insurance. They will be staying in a rental home until theirs is rebuilt.

Everything they owned was destroyed in the fire, so the family is in need of food and clothing.

All donations can be dropped off at the U.P.S. in Plymouth.