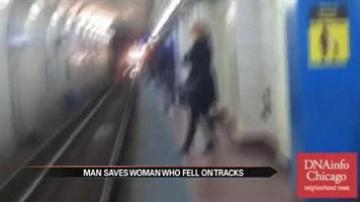 CHICAGO -- A woman in Chicago was saved from an oncoming train by a Good Samaritan’s quick thinking.

The woman fell off the platform onto the tracks as a train was approaching the stop.

Cell phone video captured a man as he jumped on the tracks with the train coming, waving his arms to get the conductor's attention.

The man is now considered a hero.

The woman was taken to the hospital with a head injury.