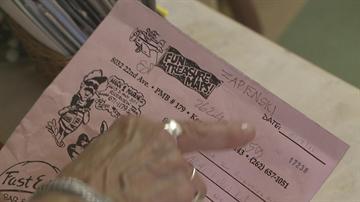 RIVERSIDE, Mich. - The deadline has come and gone for a notorious con-man that ripped-off several businesses in Berrien County.

In October 2011, Zapencki visited several Niles area businesses, collected money in exchange for a spot on his ‘fun treasure maps’. Zapencki promised an April 2012 delivery and Niles police told him if maps were not delivered by August 17th charges would be sought.

ABC 57 News has learned that Zapencki’s visit to Berrien County extended beyond Niles.

“I was just about to say ‘well Janet you got scammed,” said Janet Sullivan. “But then that very night your program came on I heard ‘treasure map’ and I went ‘whoa,’” she said from her store, ‘You’d go GAGA’ antique shop in Riverside.

Zapencki roped Sullivan into the scam and didn’t realize there were other victims until she saw an ABC 57 News story about Zapencki. “It’s pathetic, it’s just pathetic,” she said.

For $150 Zapencki promised 1000 tourism maps depicting businesses that bought in. Zapencki was ordered to pay $250,000 in Wisconsin for ripping-off hundreds of businesses.

Sullivan thinks that since the price was only $150 there are several other victims out there across Berrien County that just threw up their hands and didn’t complain.

Sullivan said each and every business now has a responsibility to call the FBI office in Detroit, like she did, so Zapencki cant prey on anyone else. “He’s just going to go someplace else and move right down the road.”

Niles police said paperwork should be into the prosecutor’s office within the next couple weeks.

Zapencki has not returned several phone calls made by ABC 57 News for a comment on this story.