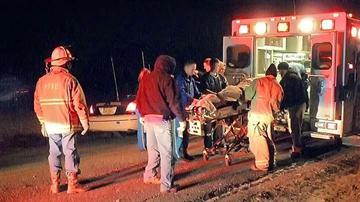 KOSCIUSKO COUNTY, Ind. – Two men were hospitalized and one was arrested after a domestic dispute in Warsaw Wednesday night.

According to the Kosciusko County Sheriff’s Office, they responded to the Suburban Acres Mobile Home Park on County Road 175 East on reports of a shooting.

When they arrived they located Ruben Enciso with approximately 14 stab wounds.

While establishing a landing zone for a medical helicopter, Hugo Alvarado was found lying in a ditch approximately 150 feet from the alleged stabbing scene.

Alvarado had a fractured leg and a head wound.

Both Enciso and Alvarado were taken to the Parkview Regional Medical Center in Fort Wayne.

Deputies say Juan Carlos Alvarado and Hugo Alvarado went to the residence of Enciso and confronted him in a back bedroom in a domestic dispute.

Deputies learned that Juan Alvarado might be at a home on Columbia Street and located him at the residence. He was taken into custody without incident.

Juan Alvarado was preliminarily charged with felony attempted murder with a knife.

A search warrant was executed at the home and deputies located a knife believed to be used in the stabbing and a small amount of marijuana.

Enciso is in serious condition at the hospital.

Hugo Alvarado is in fair condition.

Deputies say Hugo may face charges because he allegedly prevented occupants in the mobile home from leaving or calling for emergency assistance after the stabbing.