Man struck by SUV while riding moped in South Bend 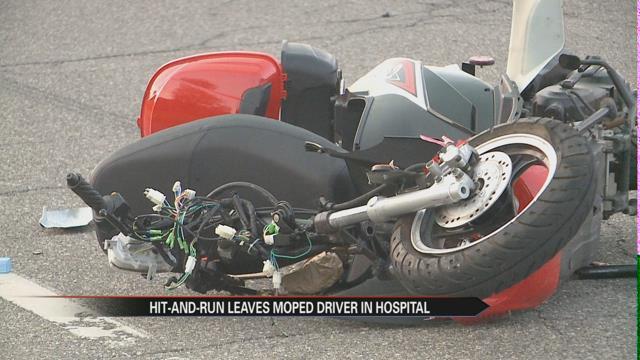 On Monday night a man was struck by an SUV while riding his moped in South Bend. At 8:10 p.m. police received a call for a hit and run injury accident at Bendix Drive and Roger Street. After the victim was taken to Memorial Hospital a demolished moped, a bumper, car lights, and debris lined the street.

“But when he (the driver) pulled away he was going 45 or 50 he just took off,”  South Bend resident Juan Constantino said.

Constantino was driving north on Bendix when he witnessed the accident happen. Constantino says he got out of his car to help the man who was riding the moped when he saw the other driver take off.

“Bleeding everywhere his legs were all torn up there was really nothing we could do we had to wait for the ambulance,” Constantino said.

Constantino said the moped was traveling south on Bendix Drive when he was struck by a maroon SUV.

“He was unresponsive just spitting and choking on his blood we were seriously scared and thought he was going to die we didn't know what was going to happen,” said Constantino.

Sgt. Chuck Stokes, South Bend Police, says the injured man was taken to Memorial Hospital, and as of Monday night was listed in serious condition.

The accident happened near Robert Bosch Braking Systems, and police will be reviewing their security cameras for possible leads in the case.