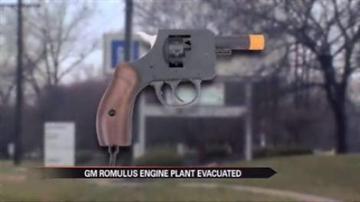 ROMULUS, Mich. — A gunman accused of causing an evacuation at a GM plant only shot off blanks.

Officers say he did it to raise attention to unpleasant work conditions.

"He got what he felt he had to say out. He placed the gun on the table and surrendered to us," said Joshua Monte, captain of the Romulus Police Department.

The man threatened to commit suicide. He was taken into custody by police.