Man trapped in septic tank for hours before being rescued 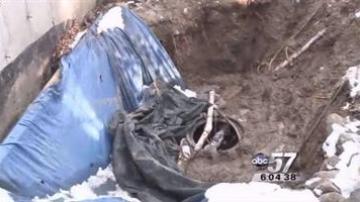 UNION, Mich. - A Cass County man is recovering from bumps and bruises after he fell into a septic tank. It happened on Wednesday near Shavehead Lake at a lakeside home on North Drive.

The 60-year-old contractor was installing a new sewer system at a vacation home off North Drive Wednesday afternoon. “He happened to step on one part of it and went through the top,” said Jerry Myers, a Porter Township fire firefighter. The septic tank was in the ground right next to the sewer system.

Myers said the septic tank caved in and the man fell inside. “I got to give the guy a lot of credit he’d been in there for a couple of hours before we got there,” said Myers. The contractor was stuck in the one-foot by one-foot hole up to his armpits.
The man yelled for help until a neighbor found him hours later. “He was a really brave guy he deserves a lot of credit,” said Myers.
The septic tank did not have sewage inside.
Share this article: