WARSAW, Ind. -- Warsaw Police arrested a suspect in an attempted bank robbery just half a block from the Lake City Bank.

Employees told police around 9 a.m. a man entered the bank and yelled, "Give me all your [expletive deleted] money."

The man had a bandana covering his hand, which employees feared was covering a gun, police said. 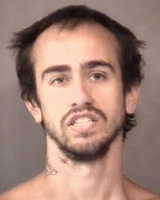 Raymond Halsey
The suspect paced the lobby, then walked out of the bank after about 15 seconds and left the bank and walked eastbound.

Witnesses told police the suspect was a white male in his 20s, wearing green sweat pants and no shirt.

A Warsaw Police officer in an unmarked car was at the drive-up/ATM on the east side of the bank when the suspect walked in front of him after leaving the bank, police said.

A bank employee alerted the officer about the attempted robbery and the suspect was taken into custody less than half a block from the bank.

Police said they did not find a weapon.

The suspect was identified as 27-year-old Raymond Halsey of Syracuse.

He is facing preliminary charges of attempted bank robbery, failure to identify and disorderly conduct.