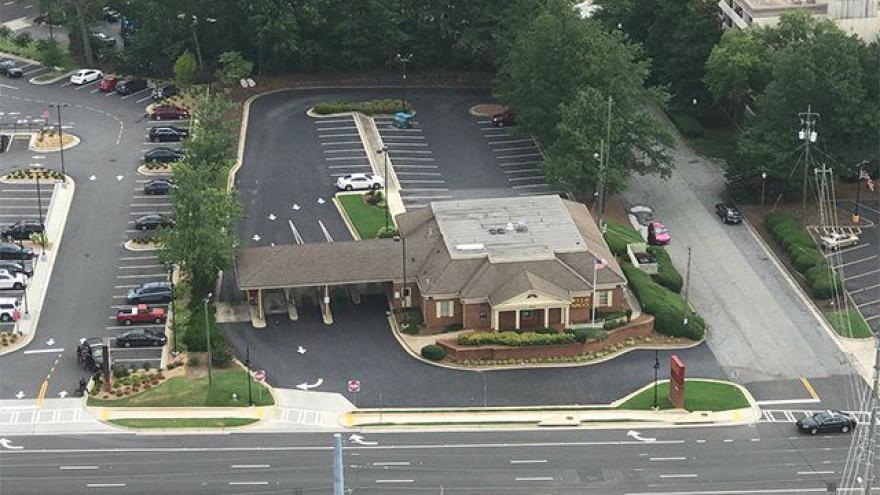 Police were on the scene of a standoff and hostage situation at the Wells Fargo location at 2675 Windy Hill Road in Marietta. Photo courtesy WGCL

By Jason Hanna and Ralph Ellis

ATLANTA (CNN) -- A man claiming to have a bomb as he held two hostages inside an Atlanta-area bank has been killed, authorities said Friday.

The Georgia Bureau of Investigation identified the suspect as 33-year old Brian Easley.

Easley allegedly entered the Wells Fargo bank branch near Marietta and told negotiators by telephone that he had a bomb in a backpack, Cobb County Police Chief Michael Register said.

He wasn't trying to rob the bank, Register said, but claimed to be a military veteran and wanted to air grievances with "military entities." Register didn't say what the grievances were.

WAGA reported an armored SWAT vehicle drove up to the bank door around noon and officers went inside and freed the two hostages. About 10 gunshots were heard after the hostages escaped, WAGA said.

Pierce characterized the man's death as an officer-involved shooting.

"(The suspect's death) is not something that we want to happen, but unfortunately to preserve life, sometimes it becomes necessary," he said.

After the man was killed, the backpack was taken to another location and destroyed. Police didn't say whether there was a bomb in the backpack.

Police were called from the location around 9:30 a.m. ET by a man who who "made general threats," Cobb County police spokeswoman Alicia Chilton said. Register said the man had complaints about "military entities."

Easley claimed to have a bomb and said he was holding at least two people in the building, FBI spokesman Steve Emmett said. The man described his "bomb" as having enough explosiveness to give "us concern not just for the building but the surrounding area," Register said.

Police arrived outside the bank, located on Windy Hill Road northwest of Atlanta, and closed several nearby roads.

Subsequently, a man claiming to be the hostage-taker called CNN affiliate WSB-TV.

He talked to one of the station's assignment editors on the phone for more than 30 minutes, saying he was a homeless Marine veteran who served two tours in Iraq with a supply company, and had no money for food, WSB reported.

Police say they are trying to identify the man but did not confirm the caller was the hostage-taker.

There was conflicting information about how the incident ended.

Shortly after noon, Cobb County police spokesman Pierce said everyone who'd been in the bank with the man were released unharmed. The suspect remained inside, and police were trying to determine what was happening in the bank, Pierce said.

But Register, the police chief, announced later Friday that police had entered the building to try to rescue two hostages, leading to the suspect's death.

"We felt that there was a window of opportunity to get the two hostages out, and certainly we took that opportunity ... based on the danger we believe they were in," Register said.

When Register announced the suspect's death around 1:45 p.m. ET, he said nearby buildings were still on lockdown because investigators were trying to determine whether a bomb was in the bank.

A nearby Chick-fil-A restaurant was one of the establishments on lockdown because of the situation at the bank, manager Hailey Vines said.

The Georgia Bureau of Investigation has taken charge of the investigation, Pierce said.