Manning returns to Indy for annual Celebration of Caring Gala 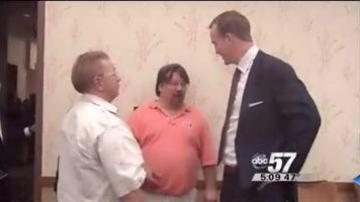 INDIANAPOLIS, Ind. -- Former Colts QB Peyton manning made his first public appearance in Indy since he was let go from the team.

Manning and his wife, Ashley, were in town and sserved as honorary chairpersons at the fifth annual Peyton Manning Children's Hospital at St. Vincent Celebration of Caring Gala

Manning said he plans to continue most, if not all of his family's charitable efforts in Indy even though he's now a Denver bronco.

"I feel good, working hard, you kind of feel like a rookie again, learning the whole new offense,” said Manning.  “Unfortunately you aren't allowed to play like a rookie."

Manning also spoke about the man filling his shoes, Andrew Luck. He said he expects luck to do well in Indy.

He even joked about taking credit for his success since Luck attended Manning's passing camp.