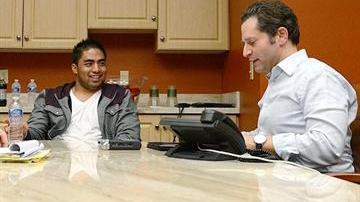 SOUTH BEND, Ind. - Manti Te'o broke his silence Friday night saying he was not involved in the relationship hoax.

The news broke on Deadspin.com Wednesday. Te'o didn't speak Wednesday night or Thursday. He even cancelled a sit down interview with ESPN Thursday afternoon.

Friday evening, Te'o sat down with a reporter from ESPN for a 2 1/2 hour interview and limited details of the interview were released around midnight.

"Manti Te'o denied being part of a hoax involving a relationship with a person online whom he considered his girlfriend," according to ESPN.

"No. Never," Te'o said in an interview with ESPN's Jeremy Schaap.

According to ESPN, Te'o said he didn't make anything up to help his chances at winning the Heisman. Te'o came in 2nd place to Texas A&M quarterback Johnny Manziel.

"When (people) hear the facts, they'll know," he said. "They'll know that there is no way that I could be part of this," Te'o told Schapp.

The off camera, but recorded, interview took place in Florida. Te'o is at the IMG Training Academy preparing for the NFL draft.

Below is more, directly from ESPN in regards to the interview:

• He lied to his father about having met Kekua, prompting his father to tell reporters that the two had met. Several media stories indicated that he and Kekua had met. Te'o insisted they never did.

• He tried to speak with Kekua via Skype and Facetime on several occasions, but the person at the other end of the line was in what he called a "black box" and wasn't seen.

• The first time he met Ronaiah Tuiasosopo was after Notre Dame beat USC on Nov. 24. Tuiasosopo is the man Deadspin and others have said was behind a hoax.

Earlier Friday, ESPN's "Outside The Lines" reported that Tuiasosopo called a church friend in early December crying and admitted to duping Te'o.

The friend, a woman in her mid-20s, agreed to be interviewed under the condition that she not be identified, saying she was fearful for her family's safety because of the overwhelming publicity the story has generated.

Te'o spoke of Kekua as his girlfriend several times after Dec. 6. One was at the Heisman Trophy presentation in New York on Dec. 8 to ESPN's Chris Fowler.

Another was on ESPN Radio the same day.

There were two other times, including a column in the Los Angeles Times on Dec. 10. He was also asked about it at a Jan. 3 news conference prior to the BCS title game but did not refer to his "girlfriend" directly.