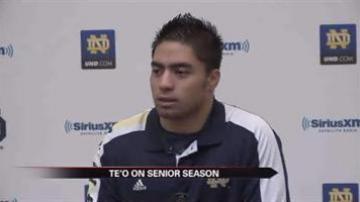 SOUTH BEND, Ind. -- A historic season is coming to a close. Saturday, Notre Dame’s senior football players will run out of the tunnel for the last time. No one has stood out more over the last four years than Manti Te’o.

Te’o says he will have 40 family members attending his final home game.

"I couldn't have, you know, pictured it any better than to run out of that tunnel one more time,” said Manti Te’o.

At 10 and 0, a National Championship contender and prospective Heisman candidate, the conclusion of his Irish career looks bright.

"I think when I run out of that tunnel for the last time and I'm greeted by my parents, that's when it'll hit me,” said Te’o.

As the face of the 2012 Irish football team, Te'o has raked in his fair share of accolades- including a record breaking 6 interceptions this season, the most ever posted by a Notre Dame linebacker in a single season.

But for him, no statistic is as great as the opportunity to finish a perfect season.

"If you ask any of us what's more important, personal accomplishments or success as a team, I think each and every one of us would say the same thing. We're glad we're playing this senior game hopefully to be 11 and 0 and not trying to play it to be bowl eligible,” said Te’o.

If they remain undefeated, it would be the first time the Irish have been undefeated for the home season since 1998.

"The guys that are going to run out for the last season game here at Notre Dame and hopefully more to come, that's who has changed this program,” said Te’o.

This year's senior class is the last of the Charlie Weis era and they've compiled a total 32 career wins, the most by a senior class in nearly a decade.