Many returning soldiers deal with lingering effects of war zone 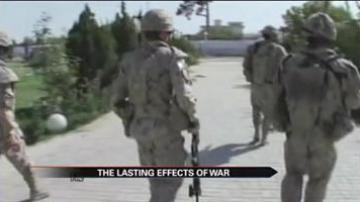 SOUTH BEND, Ind. -- After serving in a war zone, it can often be difficult for our military members to adjust to life at home. One local veteran shared his story.

"It has so many different effects on your emotions and mental state, your family life," said Cedrick Davis, veteran of the Iraq war.

For service men and women, they train for battle.

Davis says no matter how much you train, when it's the real deal, it affects you in ways you would never imagine.

"As an American we don't like to harm women and kids and when a child no older than 13 years old come running at you with a gun, it's him or you - and you can't freeze up. You can't hesitate," said Davis.

Davis has been home from war for years, but he says the effects still linger today.

Christine Stacey is a counselor who specializes in PTSD - Post Traumatic Stress Disorder.

"It's hard to go from a military situation where you get up in the morning and you pick up your gun and you go to work, to come back to civilian life where you are expected to change all of that," said Stacey.

Stacey says from flashbacks to panic attacks, readjusting to life after war is challenging.

"I think some of them forget that they are not in the combat zone anymore," said Stacey.

But they both say that through therapy, it is possible to heal and move forward.

Stacey says it's just as important for family members and spouses to go to therapy as well, so they can better understand what their loved one might be experiencing.