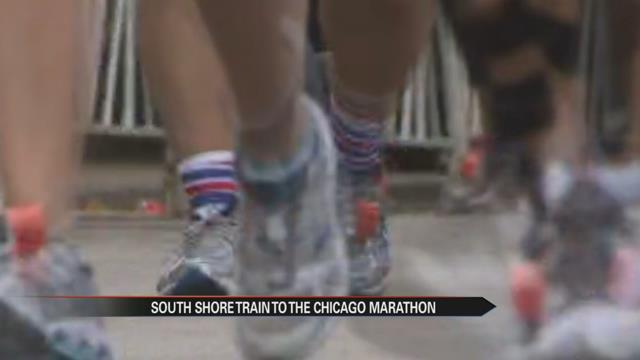 Approximately 1.7 million spectators and over 40,000 runners are attending the Chicago Marathon Sunday morning. For Michiana the trip is just about an hour and half by train.

The South Shore added an extra westbound train Sunday morning leaving at 4:20 a.m. in order to get runners to the starting line by 7:30 a.m.

This is the 38th year for the Chicago Marathon and experienced runners say gridlock traffic on race day is normal.

“Last race I did we drove around and could not even find a parking spot. And when you are out there you got so many things to worry about breakfast, training, did you make sure to get your bib,” says Derrick Rosses a Chicago Marathon runner from Kalamazoo.

“Not to have my car and not to have to worry about traffic because it gets pretty gridlock down there in Chicago on race day- so it’s one less thing to worry about on marathon day,” says Rosses.

Rosses left on the additional early train out of Michigan City but for spectators there are trains leaving Michiana as normal throughout the morning with schedules available online.

There will be post race activities for runners and spectators that end at 3:30 p.m. central time.

Lynn Bessegato a Chicago Marathon runner from LaPorte is running the Chicago race for the first time. She wanted to make sure her and her family made it to their destination.

“We were worried about getting there and dealing with the traffic. If there is an accident on the highway, you are not going to run the marathon or whatever. So we were like yea we are taking the train,” says Bessegato.

An extra train coming back to Michiana was also added for afternoon. That train will leave Millennium Station at 2:30p.m. central time.

“We will just get off the train and be there and then there will be a train waiting when we are ready to come home,” says Bessegato.