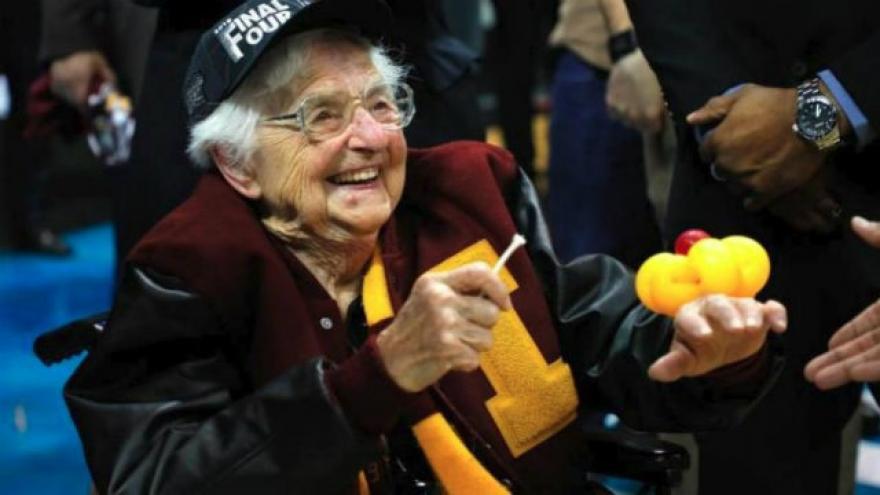 (CNN) -- What makes NCAA March Madness special is when a Cinderella team advances in stunning fashion.

This year, that team is the Loyola University Chicago Ramblers, becoming just the fourth No. 11 seed to reach the Final Four in the history of the NCAA Division I men's basketball tournament.

And this Cinderella story has a fairy godmother.

For nearly a quarter of a century, Sister Jean Dolores Schmidt has been the team's chaplain. She's also the Ramblers' biggest fan.

And at 98 years young, this nun is the star of the NCAA tournament.

"You're a celebrity," CNN's Coy Wire said in a recent interview with Sister Jean.

"I know," she replied. "That's what they tell me. You probably know, I corrected the reporter the other day. She said, 'You're national.' I said, 'No, we're international.'"

According to ESPN, Loyola has approved more than 25 Sister Jean T-shirts -- with her blessing, of course -- from multiple companies. A new bobblehead of Sister Jean, donning her Loyola jacket and scarf, is available for pre-order for $25 by the National Bobblehead Hall of Fame and Museum.

At Loyola, Sister Jean is well known, having been there for more than 50 years. As a former basketball player and coach herself, she knows the game, giving the players a scouting report and leading them in prayer before each game.

"When people say, 'Why do you do this? You must be awfully tired,' I said, 'What difference does it make at 98, whether I'm tired or not?'" Sister Jean said.

"But the other thing is that I feel that's what I'm called to -- is to minister. And I want to do that. I talk very honestly with the young men. I talk honestly with everybody."

"We broke your bracket, Sister Jean"

According to Loyola-Chicago's website, she's been in the religious order of the Sisters of Charity of the Blessed Virgin (BVM) for 81 years.

She joined the BVMs in 1937 and earned multiple degrees at schools in Los Angeles. She was a principal, coach and teacher at several schools in California and Illinois.

In 1961, Sister Jean moved to Mundelein College, which was an independent women's college that merged with Loyola-Chicago in 1991. She retired from full-time work in 1994.

In 2009, she was honored with the Dux Mirabilis Award, which, according to the Loyola site, is "an honor given to an extraordinary leader in the Loyola community for outstanding contributions to the University and its mission."

It's tradition in the US for fans to fill out NCAA brackets in advance of the tournament, trying to predict the winners of the games in the 68-team field.

Thanks to upsets, Sister Jean, just like everyone else, now has a busted bracket, too. But it was her own team that did it to her. She had the Ramblers losing in the Sweet 16.

Blissfully for her and Loyola fans, she was wrong, as the Ramblers took down No. 7 seed Nevada 69-68 in Atlanta to reach the Elite Eight.

"(Clayton) Custer said to me as he got off the court, 'We broke your bracket, Sister Jean,'" she said of one of the Ramblers' star players. "I said, 'That's fine with me. Let's keep going.'"

But, as other fans do, Sister Jean has an alternate bracket.

"I have Loyola in my second one, which I call them the -- a Cinderella dream bracket," she said. "And they're going to the top."

The Ramblers aren't done yet, advancing to the Final Four with a convincing 78-62 win against No. 9 seed Kansas State. It's Loyola's first Final Four appearance since 1963, when the Ramblers won their lone national championship.

Loyola will play No. 3 seed Michigan on Saturday in San Antonio, Texas. Should the Ramblers win, they'll face either No. 1 seeds Villanova or Kansas for the championship.

"I feel very emotional about the whole thing, but that doesn't stop me from talking," Sister Jean said. "I keep saying, be careful San Antonio. The Ramblers are on their way."