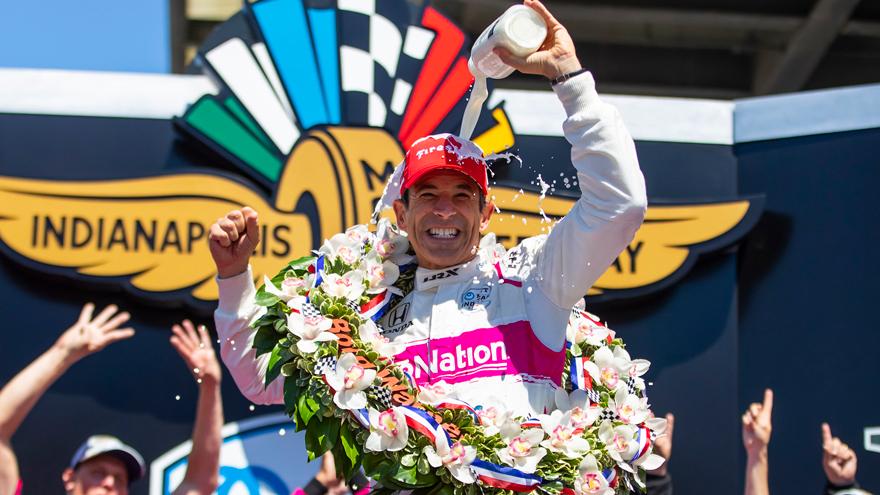 (CNN) -- Marcus Ericsson of Honda survived a late challenge to win the Indy 500 on Sunday and earned the rights to the coveted Borg-Warner Trophy and to celebrate on the podium with a traditional bottle of milk.

Ericsson was up 3 seconds with 5 laps to go and flying to a win when Jimmie Johnson crashed into the wall, causing a red flag that temporarily stopped the race and set up a final sprint to the finish.

On the restart, Ericsson fought off an encroaching Pato O'Ward to win the race for the first time in his career.

In a post-race interview, Ericsson said he had to refocus for the restart but knew he could still take the checkered flag.

"I had to do everything there and then to keep them behind," he said. "I can't believe it, I'm so happy."

Ericsson moved to the lead after a catastrophic mistake from New Zealander Scott Dixon late in the race.

Dixon, who started on pole position, looked to be the likely winner with the strongest car at Indianapolis Motor Speedway until a speeding violation on his final pit stop knocked him out of position to win. After leading 95 of the 200 laps on Sunday, Dixon takes solace in becoming the all-time lap leader in Indy 500 history, surpassing Al Unser.

Ericsson, who raced in Formula One from 2015 to 2018 before shifting over to IndyCar, is the second Swede to ever win the Indy 500, following Kenny Bräck's title in 1999.

He faced challenges from seven other former winners in the field, including four-time winner Helio Castroneves, who finished in 7th place.

Named after the 500 miles completed by the field, "The Greatest Spectacle in Racing" is the flagship event of the IndyCar Series and was first raced in 1911. Its arena is the Indianapolis Motor Speedway -- a 2.5 mile long oval so large it encloses an 18-hole golf course and has a permanent seating capacity of 257,325, the highest-capacity sports venue in the world.

This year featured the return of all those spectators after the Covid-19 pandemic limited last year's race to a reduced crowd and kept all fans from attending in 2020.

The Indy 500 was the 2nd leg of a three-part day of elite motor racing Sunday, coming after Formula One's Monaco Grand Prix and before NASCAR's Coca-Cola 600 in Charlotte, North Carolina.