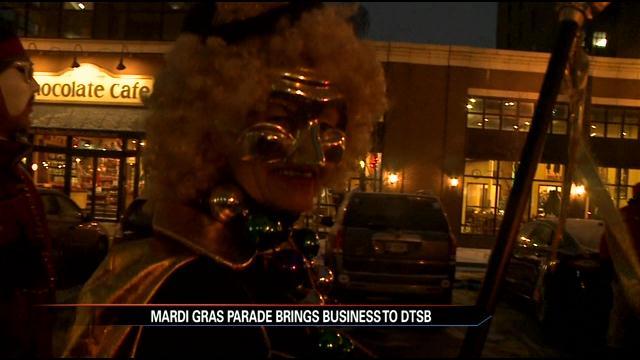 Those living in South Bend braved the snow and frigid temperatures to bring the sounds and sights of New Orleans to the city.

On a late Tuesday night a local restaurant was packed full of energetic customers looking to celebrate Fat Tuesday, first with a parade then live music.

It wasn't the cold people were feeling, and it wasn't Bourbon Street they were walking.

"Three years ago, my friends and I were sitting around in the living room when one of my best friends, Peter, said we should have a parade in South Bend," said Matthew Teters, the event's organizer.

All it took was a buddy hailing from New Orleans to give Teters this idea.

And despite the cold temps, many still felt the atmosphere of New Orleans.

Mendell, who marched in the parade, is South Bend's biggest fan.

He walked in Tuesday's parade to show support for the city's growing metro area.

“Downtown has definitely gotten a lot better. There are a lot more events going on," Mendell said.

And the local restaurant, Chicory Café, was the spot that all of these people marched right into.

And although the parade ended there, the party did not stop.

“The best party in town is definitely here tonight,” said Philip Schreiber, owner of Chicory Café . "We are the premiere New Orleans-style restaurant in the area.”

This was the first night the restaurant had a chance to use their new expanded space.

"There were obviously so many people that were trying to get in to the restaurant on special nights like this,” Schreiber said. “Expanding the restaurant seemed to make sense and so far it's paid off.”

The plans included a new spot for the band, a bar to mix some drinks and plenty more seating for the ever growing crowd.

“When people throw a party, people like to come out for it."

That's how Teters felt too.

Three years later a small idea is finally paying off.

"I hope it's helping businesses.”  Teters said. “Anything we do to bring people downtown and experience downtown, I think it helps grow businesses and helps grow the feeling for South Bend."