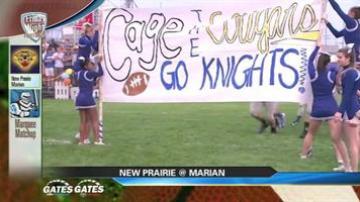 The Cougars wasted no time and came out guns blazing early in the first half.

Senior Tyler Weller kicked things off for New Prairie late in the first quarter with a three-yard-run for the touchdown. Cougars were up seven.

Nick Brassel followed Weller's lead. Cougars first and goal. Brassell punched it into the end zone. At the half the score was 14-0 New Prairie.

The Cougars hung on to that momentum into the third quarter. Senior Tyler Weller scored another touchdown to make it 21-0.

The Knights scored late in the third. Quarterback Devin Cannady passed to Jacob Whitfield. Whitfield took it to the end zone for the touchdown on a 62-yard-run.

At the end of the third quarter, the score was New Prairie 21, Marian 7 and the game was delayed due to lightning.