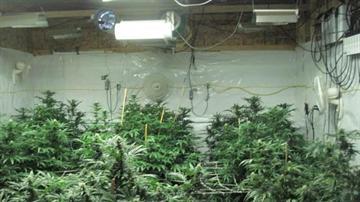 VAN BUREN COUNTY, Mich. -- A marijuana grow house was discovered in a pole barn on property in the 76000 block of 48th Avenue in Coloma Township, according the Van Buren County Sheriff’s Office.

The Covert Township Police Department contacted the sheriff’s office after learning there may be a grow operation on the property.

Detectives with the sheriff’s office’s Narcotics Unit saw a white box van back up to the barn and a man go inside during the investigation, according to reports.

Detectives and police went to the barn and spoke with the man.

Detectives obtained a search warrant for the pole barn and entered it.

A total of 27 marijuana plants were seized along with several Ziploc bags of marijuana weighing approximately one pound, reports said.