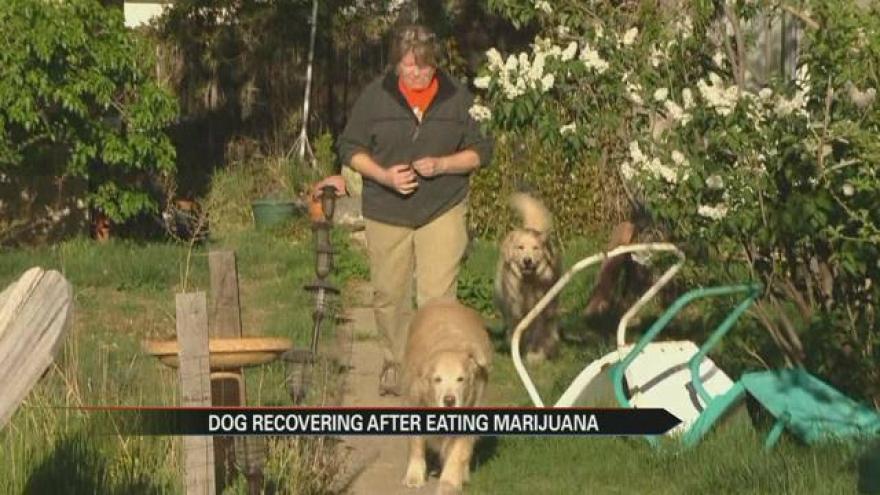 (CNN) -- A Colorado dog owner is asking marijuana users to be more careful with their leftover pot.

Moore said the 10-year-old dog couldn't stand to eat. "It was like her legs didn't work at all," she said.

Chance's vet diagnosed the dog as having ingested marijuana. The telltale signs: the animal appeared depressed, drunk or stupefied for no apparent reason.

The pet owner said she took Chance on a walk in Denver's Highlands neighborhood park a few days after the 4/20 pro-marijuana rally, according to the affiliate report.

That's where Moore believes Chance got into the pot -- probably eating or licking a THC-laced edible, like a cookie or brownie.

Dr. Allison Jenkins of the Highlands Animal Clinic told KCNC that when a dog ingests marijuana, it could be affected for several days.

Vets can try to induce vomiting if caught early, but otherwise all you can do is provide supportive care, Jenkins said.

The most important information, vets say, it to let them know when and how much marijuana was consumed.

Colorado voters legalized weed in 2012 , and dispensaries opened two years later. Vets have seen an increase of pets -- mostly dogs -- that have gotten into theirs owners' stash.

The VCA Alameda East Veterinary Hospital in Denver says there's been a "200% increase in marijuana toxicity cases" called in to the Pet Poison Helpline.

Pets can quickly overcome their symptoms. But there have been several fatal cases of animals accidentally eating highly concentrated marijuana-laced foods.

Animals do not get "high" under the influence of marijuana like human do, according to a report by the Humane Society of Boulder Valley.

"The symptoms (staggering, agitation, stupor, etc.) that develop in pets do not appear enjoyable for them," the report said.

Moore said Chance has fully recovered. But she wants marijuana users to be "aware (of) how their habits can affect other people and animals," she said.

CNN's Lechelle Benken and Sophie Lewis contributed to this report