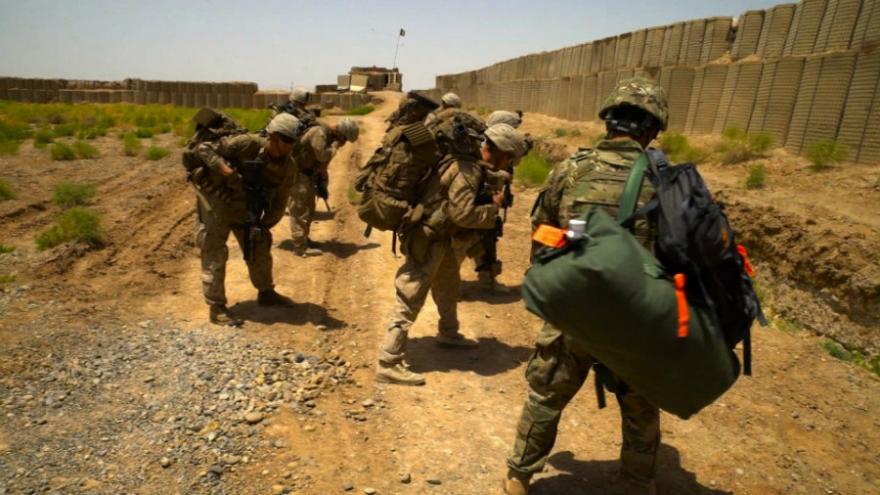 CAMP SHORAB, Afghanistan (CNN) -- The plume of smoke and dust rose over the runway, high above the now-deserted but once costly and vital control towers.

Then a second rocket slammed into the tarmac just feet away from where a C130 cargo plane would imminently land to ferry us out.

The Marines with us at first appeared unfazed. Some were perhaps young and new to it all, while the older ones stood tall, not flinching. I crouched behind a wheel until those tires were used to race us back toward a shelter.

Seven years ago, it would have been mere minutes before that Taliban rocket team was bombed in retaliation by US forces protecting a thousands-strong base. But in 2017, the US Marines here -- all 300 of them -- seem oddly vulnerable.

They don't leave the wire much, mostly just to train and advise, leaving the fighting to the Afghans. Yet all the same, three separate rocket attacks hit their bases in three days -- two near us -- one injuring 10 Afghan soldiers, and another an 8-year-old boy.

This is the painful reality of Afghanistan 2017. The country is in one of the most violent periods of its recent history, and its challenges are deepening. But the sense of exhaustion, of solutions long having lost their sparkle, pervades. And as President Trump weighs his first move in America's longest war, its 15 years make it absolutely nothing new to many of the Marines currently at its sharp end.

"I don't think I've ever bothered to count. Too many, between here and Iraq," he said. "A lot of blood in the ground."

Born on September 11, Reid is back in Afghanistan's Helmand Province for the second time. He quips that the 300 Marines he works with now are the number that "ran the chow hall" when he was last there in 2010.

I asked: How does it feel to have to go at it all over again?

"Discouraging," he said. "There is a definite feeling of a sense of obligation to get this right because of those who have gone before us."

How do you get it right? From the limited perspective of our three-day tour -- mostly inside bases -- it seems the Marines have made a difference here. Most importantly, they are now camped just outside the regional capital of Lashkar Gah, which a year ago was on the brink of falling to the Taliban, whose flag you could see just across its central river.

The Helmand district of Nawa was retaken last week by Afghan National Security Forces, yet at about the same time nearby Gereshk district was attacked by the Taliban, with multiple checkpoints hit, and at one point six overrun. Things are better, but not good. Helmand will probably never be good any time soon, but the Marines' presence and massive aerial firepower have arguably stopped the entire opium-rich region from being swallowed by the Taliban.

But the Marines are only one part of the picture in a country where, according to the US government's own auditors, the Taliban influence or control about half the land. ISIS too, intermittently rises, and then, after coalition airstrikes, falls -- competing to be the most extreme actor in a crowded marketplace.

The government in Kabul is weak, ridden by conflict and rivalry between senior players.

And the West's ideas for stabilizing the country are running out.

So what are President Trump's options?

More troops? They tried that with the Obama surge to 100,000 troops, which achieved no real, dramatic drop in violence, or enduring government control.

Talk to the Taliban? Tried that too. The Obama surge was meant to force them to come to the table. But Obama set a deadline for the surge's withdrawal, so the Taliban waited them out. Now their new leader is radical enough his son was hailed as a suicide bomber in Gereshk last week, so they look unlikely to jump on diplomacy.

Pressure the Pakistanis to pressure the Taliban? They're trying that, but in the end, Pakistan sees a longer game here and has its long-term proxies in the region. Either way, this isn't entirely Islamabad's fault.

Leave? America tried that, and now it's back, trying to stop the bleeding, remembering 9/11, the lives lost fighting so Afghans could live better, and what happens when you let a country that's a magnet for extremists collapse entirely.

Try more of the same? That's probably the most likely approach that Secretary of Defense James Mattis will put before the Trump White House. More special forces to hunt al-Qaeda and ISIS. Trainers to try and maybe improve the Afghan security forces (the men we were assured -- as the Americans tried to leave five years ago -- were 100% ready to fight the Taliban but who are now subject to record casualties). Perhaps looser American rules of engagement, which will make killing Taliban easier, but killing innocent civilians easier too, which never helps win over the population. Perhaps more contractors, who already massively outnumber the Marines we saw on the base in Helmand, to spread the training burden and reduce the military's exposure.

When does it end?

But really it is the mood in the capital which tells you things are still slipping, yet again. Long-term Afghan friends discussing for the first time how they might leave. A top executive saying his employees are leaving their large, high-profile Afghan company to protect themselves from possible attack at their central offices.

This is not a time for optimism. There is no sign the Taliban are weakened, even though one Afghan official told me hundreds of mid-level leaders have been taken out in raids over the past year.

Their leadership is more radical than ever, and they are likely to see handsome funds from a productive opium harvest, possibly boosted by a new poppy seed that blooms more quickly, massively increasing production. Afghanistan's bleed is slow, and perhaps hidden or ignored by much of the world, but happening all the same.

Take this final anecdote from our visit to Helmand, when the Marines took us to a remote outpost where they were advising the Afghan army. We were there to see them pull out, removing themselves from a flat stretch of what Colonel Matthew Grosz called "Taliban country" -- a main thoroughfare between insurgent strongholds. But their advisory mission seemed to have run into one issue: There weren't many Afghans to advise.

On paper there were 500 Afghan troops, and 45 US marines. But as Grosz told me: "There's 200 assigned right now." By "assigned," he meant that there were 200 who had existed, physically at the base. But even that was optimistic, as another hundred had never shown up while the Marines were there. In fact, of the hundred they had seen, some were on operations or on patrol. So really there were fifty to a hundred Afghan soldiers at the base, almost enabling one-to-one Marine mentoring sessions.

As we sat in the Helmand runway bomb shelter, waiting for the "all clear" after the rocket attack, I overheard two young Marines chatter about 9/11 as though it was a moment of historical import rather than something they had seen live on TV. That's because for them, it is something their parents mourned when they were probably five or six.

Fifteen years of war sounds exhausting until you remember that for Afghans, it is about 38 years of war -- since the Soviets invaded in 1979.

So, you may ask yourself: When does it end?

Forget emotion, or nationalism, or solutions. Just consider the war, and everyone caught up in it, through the prism of one number: 1,600.

That's about the number of US bombs dropped in the first half of this year (1,634 to June 30, over three times the same period last year).

It's also about the number of Afghan civilians killed in the same period (1,662, most because of insurgents).

It's also the number of Afghan soldiers and police who likely died in the first 109 days of this year, based on the death rate in January and February (a SIGAR report has 807 deaths through February 24, but complete figures are unavailable).

It's also about the number of American dead since the war began and the Obama surge ended (1,676 from October 2001 through August 2012).

It's become a war whose end will be defined by fatigue, acceptance of lesser evils and which of these above numbers is the hardest to tolerate.