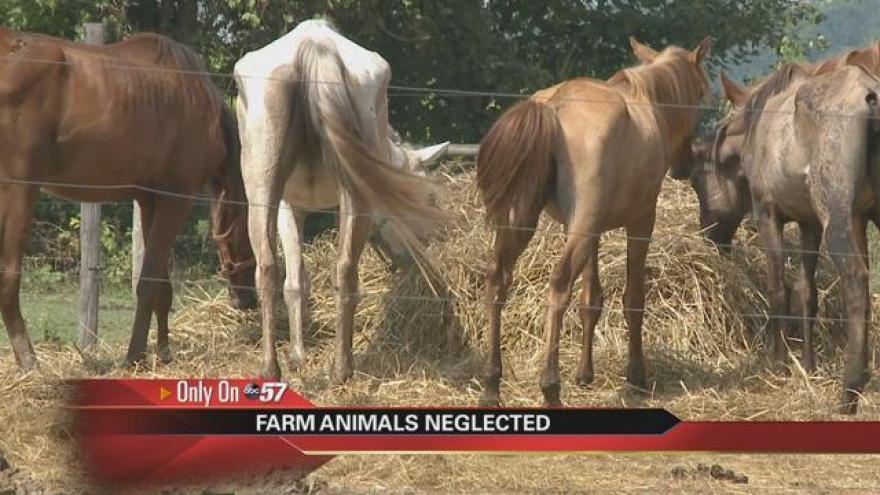 Law enforcement in Marshall County is investigating what they say is the biggest animal neglect and abuse case they have ever seen.

A trainer and boarder for his own company, SBK Training Ranch, left his home in Inwood and dozens of animals to fend for themselves.

Over 30 animals, 22 of which were horses, were found on Friday in extremely unhealthy conditions. Some belonged to the property owner Brian Watts.

Other animals belong to people who paid up to thousands of dollars for Watts to care or train their horses.

But for weeks ago Watts left with his wife to Texas and now the sight of animals emaciated has left some like Megan Luther in agony.

“I’ve never seen any of them this bad. It’s just sickening,” says Luther.

Luther once owned one of the horses found on the Watts’ property.

Wynter is the name of the white mare that was previously in Luther’s care. At that time Wynter weighed around 1200 pounds.

Luther can barely recognize the horse that once roamed her property.

“She is emaciated horribly now and she was fat when she left my property,” says Luther.

Back in May, Luther agreed to trade horses with Watts. She never imagined Wynter and about 20 other horses would reach the edge of starvation.

“They should have never been like this and I wish something would have been done sooner for them,” says Luther.

The Director of the Marshall County Humane Society says she first received a report to check on the Watts property weeks ago. Marshall County Sheriff’s Department first arrived at 11A Road in Inwood on Friday and found an empty home and a yard full of emaciated animals. One of the animals was so sick it could not even stand and needed to be put down.

Now Marshall County’s Humane Society is working to find homes and medical attention for about 10 horses that are still on the property. For these remaining animals time is of the essence.

“They are losing their muscle their body is eating away at their muscle and they can barely hold themselves up,” says Luther.

Law enforcement says Watts has been cooperative in giving up ownership of the horses so that they can find them homes.

There were also chickens, goats, dogs, and cats found on the property that are being adopted.

Bringing all the horses back to good health can cost upwards of $10,000. This is money the county does not have making adoption of the remaining horses even more essential.

The prosecutor’s office is working on a case. Watts could face charges in animal neglect and abuse.