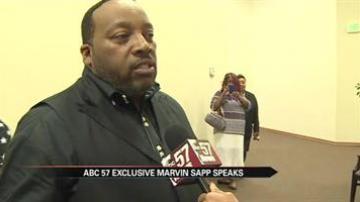 SOUTH BEND, Ind. --  Speaking out to media for the first time, international gospel singer and preacher Dr. Marvin Sapp sat down with ABC 57 to address his connection to the Teleka Patrick case.

Sapp, pastor of Lighthouse Full Life Center Church in Grand Rapids, found himself in the middle of a police investigation when 30-year-old Teleka Patrick disappeared.

"I don’t know much about the details of the case, other than the fact that I really feel terrible for her family." Sapp said.

In early April, Patrick's body was found in a lake in Porter Indiana, less than a mile away from where her car was found on the side of I-94.

"I can't even imagine my daughter ending up in that type of situation." Sapp explained.

ABC 57 obtained a copy of the restraining order Sapp filed against Patrick in September 2013, about two months before she disappeared.

In the documents, Sapp says Patrick reached out to him and showed up at his house more than 400 times.

Police made it clear that Sapp was not a suspect in Patrick's disappearance.

Sapp says he sends his condolences to the Patrick family.

"I have been keeping them in my prayers, as a body of Christ we are just supposed to uphold and lift people up and that is what I have been doing."

Patrick was laid to rest on April 25 in Orlando, Fla.