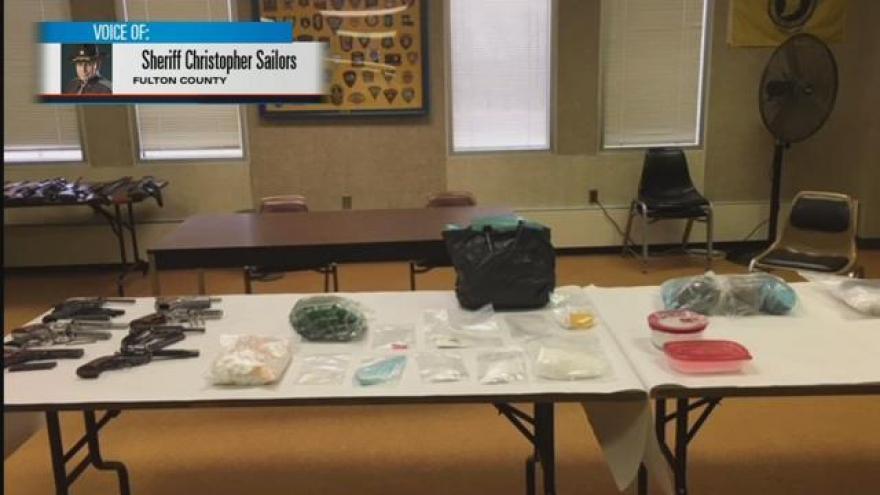 Three pounds of meth, 21 guns, and over $200,00 seized in a massive drug bust in Rochester, Monday evening.

In a quiet neighborhood just off US-31, one house has a reputation.

"It was the weird house, with weird things going on," describes one neighbor, who wishes to remain anonymous.

And Monday night, some suspicions seemed to materialize.

With him, were 25-year-old Sarah Hine, 42-year-old Brandy Fletcher, and 48-year old William James. Those three are still in custody in the Fulton County Jail.

Officials then searched Howard's home.  This is what they found:

Officials don't believe the guns are stolen, but are still investigating.

Documents filed Wednesday show Howard is now facing federal charges for possession with the intent to distribute over 500 grams of meth, and possessing firearms to further drug trafficking. Records show, this may be a part of something bigger.

None of Howard's neighbors wanted to show their face on camera, because they are concerned about their safety.

"They're still in the house," says one neighbor. "I already know the situation going on, and yet I'm supposed to sleep good at night."

It's a neighborhood filled with kids, a play set just across the street from the suspect's home.

"It makes me angry, it makes me sick, it makes me want to keep all the kids inside, which isn't fair to no one around here. No one," adds another neighbor.

Sheriff Sailors says this bust, is just a part of the drug activity going on all over Indiana.

"It's large, it's a big deal," he explains. "It's this type of thing, maybe not to this scale, but we're had a lot of drug activity all over Indiana."

He adds that deputies are working hard to try and put a stop to this.  But this may be a new trend they're starting to see in rural counties.

With Rochester being just off of US-31, it is the perfect corridor for this to occur.

This bust, was a step forward.

"You get lucky with a traffic stop and it leads to other things," Sheriff Sailors says. "And that's just good police work."