Massive iceberg breaks away from Antarctica 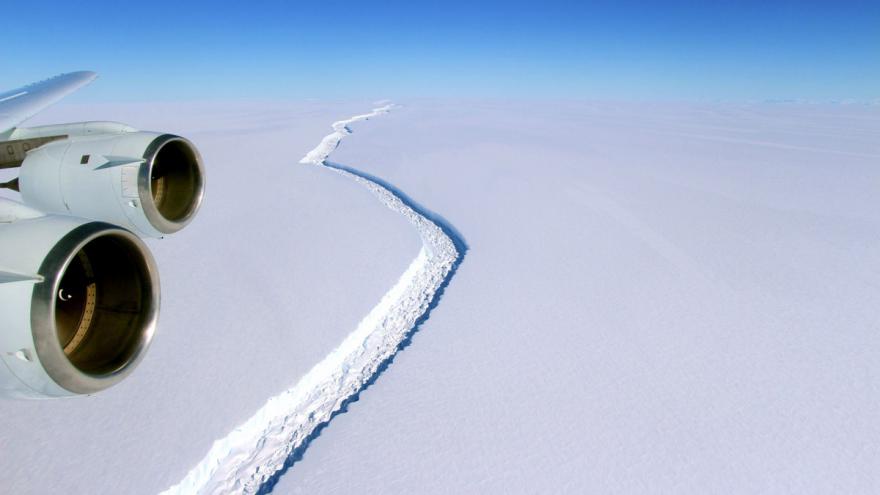 (CNN) -- A massive iceberg weighing more than one trillion tons has broken away from western Antarctica, according to a UK-based research team.

Scientists from Project MIDAS had been monitoring a break in the Larsen C ice shelf -- the fourth largest in Antarctica -- following the collapse of the Larsen A ice shelf in 1995 and had observed significant advances in the rift over the past 12 months.

Experts said the separation of a 5,800 square kilometers (2,239 square miles) section of Larsen C was confirmed to have broken away between Monday and Wednesday by NASA's Aqua MODIS satellite, which is capable of producing images in thermal infrared at a resolution of 1 km.

"We have been anticipating this event for months, and have been surprised how long it took for the rift to break through the final few kilometers of ice," Professor Adrian Luckman of Swansea University, lead investigator of the MIDAS project said in a statement.

He told CNN the team believes the iceberg has remained intact adding, "This is part of the normal behavior of ice shelves. What makes this unusual is the size."

Scientists believe the iceberg -- likely to be named A68 -- has a volume twice that of Lake Erie in North America and is more than three times the size of the greater London area.

It's half the size of the largest iceberg ever recorded: B15. With an area of 11,007 square kilometers (4,250 square miles) -- about the size of the state of Connecticut or the island of Jamaica -- it calved off Antarctica's Ross Ice Shelf in March 2000.

With the iceberg now floating independently, the area of Larsen C has been reduced by more than 12%, forever changing the landscape of the peninsula, according to experts.

Luckman said that as the sheet of ice was already floating before it carved off the shelf "there will be no immediate impact."

"This event does not directly affect anyone, and repercussions, if there are any, will not be felt for years. However, it is a spectacular and enormous geographical event which has changed the landscape."

"We will study the ice shelf for signs that it is reacting to the calving -- but we do not expect anything much to happen for perhaps years. Icebergs are routinely monitored by various agencies, and they will be keen to keep track of this one," Luckman added.

Calving is a natural occurrence but scientists have been exploring if climate change may have played a role in expediting the rift.

The team of researchers have not yet found "any link to human-induced climate change," Martin O'Leary, a Swansea University glaciologist and member of the MIDAS project team, said in a statement.

Luckman added, "We have no evidence to link this directly to climate change, and no reason to believe that it would not have happened without the extra warming that human activity has caused. But the ice shelf is now at its most retreated position ever recorded and regional warming may have played a part in that."

He continued, "This event does not directly affect anyone, and repercussions, if there are any, will not be felt for years. However, it is a spectacular and enormous geographical event which has changed the landscape