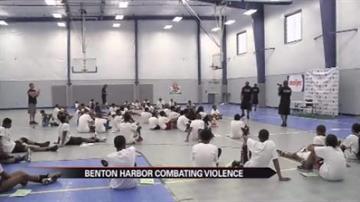 BENTON HARBOR, Mich. -- The 17 year old wanted for the double shooting in Broadway Park in Benton Harbor is still on the run. Police believe Elliot Coates pulled the trigger sending two other teens to the hospital.

Just one day after the shooting, a push to stop the violence came from former NBA player Mateen Cleaves.

"It hurt my heart to hear that that happened, that two kids were shot because they’re kids, just kids."

He says kids need support, love, and discipline. And those are some of the things he focuses on in his basketball camp.

Cleaves says if they do not get those things at home, they will get them somewhere else.

Some kids who participated in Cleaves' camp say the Boys and Girls Club and basketball camps are their only life-lines.

"Growing up the Boys and Girls Club was a place to go when I didn’t have anything to do. I didn’t have to be out in the streets like my friends," said 17-year-old Chavius Snerling. "I want to go to college that’s pretty much all I know."

Cleaves says when it comes to raising kids, it takes an entire community. He plans to continue to do his part by eventually taking his basketball camp to inner cities all over the nation.