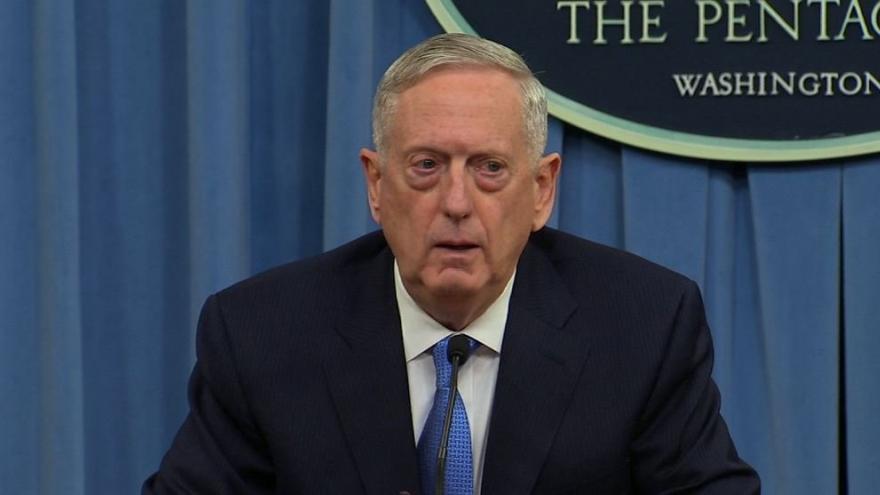 By Ryan Browne and Zachary Cohen

WASHINGTON (CNN) -- US Secretary of Defense James Mattis told the Senate Armed Services Committee Tuesday that he will be able to brief the committee on a new Afghanistan strategy by mid-July.

"I believe by mid-July we will be able to brief you in detail," Mattis said, "We are putting it together now and there are actions being taken to make certain we don't pay a price for the delay."

Mattis was replying to questioning from Sen. John McCain, who expressed exasperation that the administration is being so slow to outline its strategy, remarking that it's "Not a helluva lot to ask ... We just lost three brave Americans, when can we expect the Congress of the United States to get a strategy for Afghanistan that is a departure from the last eight years, which is 'don't lose'?"

McCain was referencing the three US soldiers who were killed during a joint US-Afghan military operation Saturday in Nangarhar province.

In May, the Pentagon said it was considering sending additional troops to Afghanistan as part of a broader set of recommendations on how to adjust the US military approach in Afghanistan.

But that plan has not yet been presented to Congress and a senior administration official told CNN on Monday that President Donald Trump is not expected to make a decision on the US strategy in Afghanistan for several more weeks.

McCain pressed Mattis on the urgency of a new plan for Afghanistan: "I hope you understand that we're going to start getting more vocal in our criticism of not having a strategy for Afghanistan. Do you agree that we are not winning in Afghanistan?"

Mattis acknowledged the need for urgency. "I understand it's my responsibility, we are not winning in Afghanistan right now and we will correct this as soon as possible."

Monday, before the House Armed Services Committee, Mattis provided some additional details on what the new troops would potentially do, stressing the advisers would provide tactical support to Afghan troops at the brigade level as opposed to the current corps/headquarters level.

"The troops that are being asked for by Gen. Nicholson ... many of them are going to be what we call train, advise, assist. These are troops that are specifically trained by our US Army to go out in the field and you apply them with the brigades, the Afghan brigades."

He went on to add, "We're talking now about putting what we call NATO air support, down at the brigade level, so when they are in contact, the high ground is now going to be owned by the Afghans. It's a fundamental change to how we bring our ... real superiority in terms of air support to help them. In other words, we're not talking about putting our troops on the front line."

There are about 8,400 US troops in Afghanistan as part of the US-led counterterrorism mission and a separate, NATO-led effort to train, advise and assist the Afghan army and police force in the fight against the Taliban.

A US defense official told CNN that accelerated operations against ISIS in should be expected in the coming weeks in response to the recent attacks.

They said this will be separate from the request to increase the number of advisers for training and assistance and the US would expect to increase the frequency of airstrikes launched. They also said the military will ramp up intelligence gathering in Nagarhar province, where most of the ISIS operatives are located. The aim of the increased intelligence will be to find high value targets and concentrations of ISIS fighters, the official said.

Since the US struck with its "mother of all bombs" earlier this year, ISIS has largely avoided assembling in large concentrations, so the official said additional targeting is needed. The official also said that the US estimates there are still several hundred ISIS fighters in eastern Afghanistan.