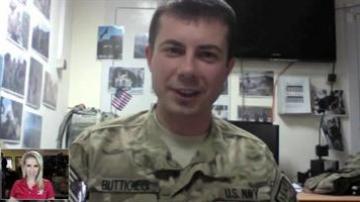 SOUTH BEND, Ind. -- For the last five months, South Bend Mayor Pete Buttigieg has been serving active duty. He spoke with ABC57 via Skype from Afghanistan.

Mayor Buttigieg says he is doing well, but that it is very dusty - and he would do anything for a cheeseburger.

But he says he feels like he's making a difference.

While away, he's trying to stay connected with his leadership team back home.

"It's pretty different from back home as you might imagine," said Mayor Buttigieg. "My home is a modified shipping container."

Residents say since the mayor left, things in South Bend have gotten worse.

"It's gotten worse since he's been gone," said Barbara Chandler.

The mayor says Deputy Mayor Mark Neal and the rest of his staff have been doing their best to deal with the city challenges in his absence.

But it's hard for him to play a more active role from 7,000 miles away.

"It's really frustrating being thousands of miles away when you see some of the challenges that have been going on, like the power outages, the storms," said Buttigieg.

He says his role in Afghanistan is to make it a safe and secure environment for everybody who lives there.

It's a role he plans to replicate as soon as he returns state side.

"The simple fact is that even one shooting is one too many and violence everywhere is something that we have to overcome," said Buttigieg.

He says one shooting is one too many.

"We've got too many children in this town and a lot of them are getting killed because of the gang violence," said Paula Chandler.

Residents say they hope things improve when the mayor returns.

The mayor will return from active duty at the end of September.